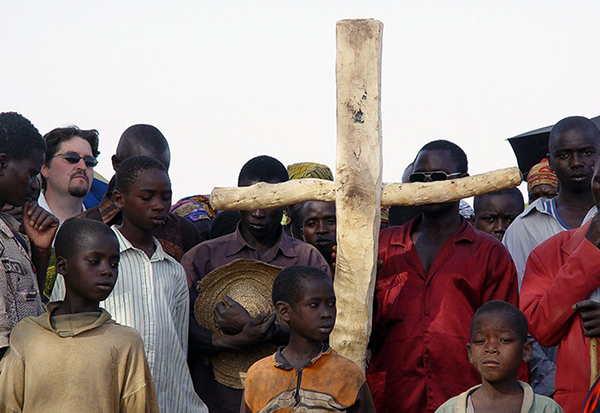 An example of courage comes from the Catholic Church in Chad, which, despite the country’s state of insecurity and instability, launched its synodal process on 17 October. In this country where communication routes are rather difficult and insecure, bishops, vicars general and lay delegates from all the dioceses and parishes of the archdiocese of N’Djamena gathered to open the synodal path in the Cathedral of Our Lady of Peace.

Father Omer Xavier KOULDJIM, national referent for the Synod and Secretary General of the Bishops’ Conference, testified to the vitality of the national team working with the diocesan referents who have already set up their diocesan and parish teams: “The work of consultation is in full swing in the decision-making, management, guidance and animation structures: Catholic Action movements, services, associations, groups of various spiritualities…”.

In an initial evaluation meeting on the start of the consultations, on 11 February 2022, “the diocesan referents stressed with satisfaction the progress of the first phase”, reports Fr Omer “Lent then was a ‘favourable time’ to listen to all the layers and peripheries of our Church-Family of God. The consultation sheets, very well adapted to the context and to each target group, were drawn up from the basic document of the Synod”.

While waiting for the results of the consultations, the Holy Father’s invitation to dedicate the day of 25 March to pray for peace in Russia and Ukraine, together with the prayer initiative “24 HOURS FOR THE LORD”, were also opportunities to live synodality on a local, national and universal level.

For example, Don Omer tells us, the initiative of the parish church of Sainte Famille de Dembé (Archdiocese of N’Djamena) was the setting for the realisation of this double intention. “Opened on Friday 25th March with a Eucharistic celebration at 5.45 a.m., the day of prayer both for peace and to be with the Lord, was marked by the permanent exposition and adoration of the Blessed Sacrament until 9 p.m., with another Eucharistic celebration at 5.30 p.m. for security reasons. It resumed on Saturday 26 March at 6 a.m. until 9 p.m. again with the same celebrations and devotions. It is noteworthy to highlight the enthusiasm of the lay faithful who came from all the parishes of the Archdiocese and the permanent presence of the priests during these times, to continuously ensure the Sacrament of Reconciliation. Echoes from other dioceses also tell us the same thing”.

Father Omer concludes: “The faithful and priests of Chad, in communion with the bishops and the whole Church, have expressed in a concrete way the synodality of the Church during this week”.