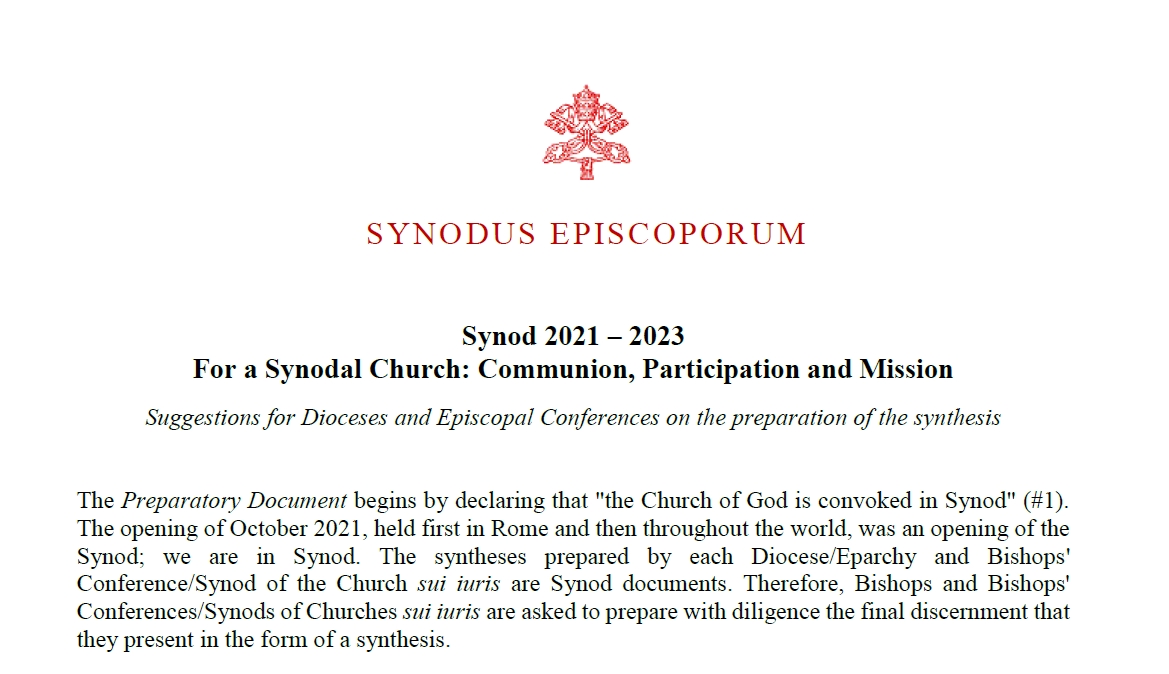 Suggestion for the synthesis of the consultation.

The Preparatory Document begins by declaring that “the Church of God is convoked in Synod” (n.1). The opening of October 2021, held first in Rome and then throughout the world, was an opening of the Synod; we are in Synod. The syntheses prepared by each Diocese/Eparchy and Bishops’ Conference/Synod of the Church sui iuris are Synod documents. Therefore, Bishops and Bishops’ Conferences/Synods of Churches sui iuris are asked to prepare with diligence the final discernment that they present in the form of a synthesis.

In this regard, the present document proposes to respond to the numerous requests for indications concerning the preparation of the synthesis to be presented to the General Secretariat of the Synod of Bishops, articulating and developing what is contained in the Preparatory Document (nn. 31-32) and in the Vademecum (Appendix D). This document is intended primarily to support the Episcopal Conferences/Synods of the Churches sui iuris in the elaboration of their synthesis, but it could also be useful to the facilitators of the synodal process within each local Church, at the level of individual dioceses/parishes, parishes, grassroots communities, associations and movements, and spontaneous groups. Each local reality is invited to creatively adapt it to its own context.

1. The purpose of the synthesis

Regarding the synthesis, the Preparatory Document states:

The synthesis that each particular Church will elaborate at the end of this work of listening and discernment will constitute its contribution to the journey of the universal Church. To make the subsequent phases of the journey easier and more sustainable, it is important to condense the fruits of prayer and reflection into a maximum of ten pages. If necessary to contextualize and explain them better, other texts can be attached to support or integrate them. (n. 32).

The purpose of the synthesis is not to present a chronology of the stages of the synodal process that were followed, nor to draw up a report that lists indiscriminately all the points that emerged during the work. Rather, as the culmination of a communal spiritual discernment, the synthesis aims to gather and express the fruits of the synodal process in a way that is understandable even to those who did not participate, indicating how the Holy Spirit’s call to the Church has been understood in the local context.

What follows could be an indicative structure for the synthesis, for a maximum of about ten pages.

Indicate the milestones, turning points, and especially the spiritual dimension of the journey (difficulties, surprises, etc.).

2.2 Body of the synthesis: discernment of the collected contributions (6-7 pages)

This part of the synthesis articulates the response to the fundamental question of the synodal process (cf. Preparatory Document, n. 26), considering the thematic questions (cf. ibid., n. 30, and Vademecum, n. 5.3) and highlighting the principle fruits of a discernment carried out during the synodal process.

The conclusion could indicate the steps to be taken in response to that which was recognized as the call (or the calls) of the Holy Spirit, highlighting in particular those points regarding which it is considered important to solicit the further discernment of the Church.

It might be useful to include an overview of the local context, with some key facts and statistics, as a background against which to place the content of the synthesis. Equally helpful may be some testimonies, quotes or stories from the participants, which preserve the originality of their way of expressing themselves and better enable one to realize the spiritual and emotional dimension of the experience. In any case, the appendices, which are not obligatory, only offer additional information. The synthesis should contain all the essential information regarding the path taken and its fruits, and therefore information regarding the contribution that each particular Church makes to the synodal path of the universal Church.

Some cautions may be helpful in preparing for the synthesis process.

It should be clearly established how and within what time frame the contributions are to be presented, organized and stored, and a strategy for handling a large volume of documents should be identified. Quantitative (e.g., structured questionnaires) or qualitative (e.g., interviews, focus groups, etc.) survey reports or expert contributions may be helpful in supplementing the contributions of synodical groups as a matter of discernment.

From a synodal perspective, it makes sense for a group to draft the synthesis, in which it might be appropriate to involve the synod team. Other members of the drafting group could be chosen based on their condition (age, sex, state of life), geographical or cultural origin, experience and/or competence in different fields (sacred sciences, human and social sciences, textual editing, etc.), with particular attention to the presence of people capable of listening to and understanding the voice of minorities, the poor and the excluded. Similarly, it will be important to ensure the presence of a smaller core group (e.g., 2-3 people) with expertise in writing, to whom the task of drafting can be materially entrusted.

3.3 Identification of the working method

Once the drafting group is formed, it should be clarified who will oversee the guiding its work and how decisions will be made in case of disagreement. If the group is large, it may be helpful to have a small ad hoc committee to resolve disputes. In addition, the method by which the group will carry out its task should be clarified, indicating the different steps to arrive at the final text and the time frame for its delivery. Some computer tools (e.g., keyword tagging software or word clouding programs) can help in the analysis of the collected materials; however, they cannot replace the work of rereading and synthesis in light of the faith that must underpin the development of the final text. The Bishops are responsible for the synodal process at the various levels (diocesan, national, etc.). Therefore, even with the necessary involvement of the drafting group, the Bishops exercise their responsibility to guide discernment by determining the modalities of elaboration, discussion and approval of the text.

Based on the methodology followed for the assemblies of the Synod of Bishops and other synodal processes, some steps are suggested, recommending that they be adapted to local cultures and contexts.

The reading of the materials collected should be carried out in an atmosphere of prayer and discernment, keeping in mind the context and culture from which they come. Starting from their own experience and expertise, those who participate in this phase try to identify the following in the materials they read:

As the work proceeds, attention should be paid to:

The work of reading with the method just described will make it possible to identify a certain number of pivotal points: sets of intuitions and questions around which it is possible to aggregate a certain number of elements that emerged from the reading, highlighting the relationships that link them. Each member of the drafting group can be invited to write a brief report highlighting the pivotal points he or she found. The method of spiritual conversation can be useful in sharing the fruit of individual work and forming a consensus.

The articulation of the main points that emerged will help to set the structure of the body of the synthesis. This will be followed by the drafting of a first draft, to be entrusted to the group of people more experienced in drafting, as indicated in n. 3.2. This draft will be refined through contributions from other members of the drafting group, until it is agreed together that the richness present in the collected contributions is adequately represented in the text.

This work does not aim to reset differences or to harmonize voices from outside in an artificial way: conflicts, tensions and difficult questions may legitimately be present both in the collected contributions and among the members of the drafting group. A synodal approach will seek to identify in what direction it is possible to walk together while discerning what seems to come from God. If this is not possible, the tensions can be indicated in the synthesis as they arose. Finally, it may be interesting to preserve local flavor or meaningful formulations through direct quotes from the voices of participants in the synodical process or from the materials collected.

Once the work of the drafting group is finished, it would be good to find a way to submit the text (confidentially) to a few of those persons who participated in the synodal process, beginning with those who are responsible for it, in order to gather their feedback and modify the text where it seems appropriate.

An Episcopal Conference/Synod of the Church sui iuris or a Diocese/Eparchy might feel called to live this phase by returning, in some way, the draft synthesis to the People of God to receive further feedback and other suggestions. This further consultation could strengthen the synthesis and lay the groundwork for its subsequent implementation. At the end of the process, an editorial arrangement of the text will be necessary, also to meet length limits.

At this point, it might be useful to take some time to prayerfully reread the entire synodal process (including the phase of drafting the synthesis). The fruit of this re-reading could enrich the introductory part of the synthesis (see 2.1 above).

Before being sent to the next level (e.g., from the Diocese/Eparchy to the Episcopal Conference/Synod of the Church sui iuris; from the Episcopal Conference/Synod of the Church sui iuris to the General Secretariat of the Synod of Bishops), the text will have to be validated and approved according to the modalities defined at the beginning of the process (cf. above n. 3.3). More than being concerned about the specific content, those with responsibility for final approval have the task of ensuring that the text is the fruit of an authentically synodal journey and is respectful of the synodal process that actually took place.

For additional resources and information on preparing the summaries, we invite you to visit the official website www.synod.va, and the supporting websites www.synodresources.org and www.prayforthesynod.va.